Due to unforeseen computer problems, I was not able to post to the blog during the Society for Environmental Journalists conference last week. But I did save a few random tidbits to share here today.

"I think of farmers in the Midwest as government-employed tractor drivers." -Organic strawberry farmer

"I don't go to meetings anymore where they try to define 'sustainable.'" - Bob Scowcroft, executive director of the Organic Farming Research Foundation

"The food system is the No. 1 point of human impact on the planet. If you change the food system, you leverage all other systems." - Mike Demmock, Roots of Change, which is aiming to create a sustainable food system by 2030.

"(The term) 'Peer-reviewed study' is not used in broadcast." - Jeff Burnside, WTVJ NBC News 6 in Miami

"We (humans) don't make the weather. We intensify it." - Schneider

"You have to move the (global warming) story forward. Scientists must stick their necks out a little more," Rick Rodriguez, Sacramento Bee editor

"For California's big water projects, decisions were made 70 years ago. It was a different world." - Frank Michny, Bureau of Reclamation, U.S. Department of Interior

Milk to be making news.

Milk is truly an American staple food. Producing, marketing and pricing are just some of the aspects of milk that make news. The California milk industry as given us such cultural icons as "Got milk" and "Great milk comes from happy cows." Today, the California Milk Advisory Board announced that it is introducing the "Real California Milk" seal, which certifies that dairy products bearing the seal are made exclusively with California milk, according to a press release published on Business Wire and picked up widely in the media.

Coincidentally, also today, the Los Angeles Times ran a story about the milk pricing formula, which it proclaimed in its headline "grates on state's cheese makers," pun intended, of course.

"Cheese makers claim that the current formula, changed four years ago when dairies were struggling with low milk prices, could drive smaller plants out of business because it raises the cost of making cheese in a competitive market where it is hard to recoup the added expense," according to the article.

"This is your basic fight over who gets the change that's left on the table," the Times quoted Butler.

Butler predicted the next phase of the pricing issue: "We will have a hearing and everyone will argue and the CDFA will decide. There is no guessing which way it will go."

On the production side, a major research project is being undertaken in Tulare and Kings county aimed at gaining an better understanding about what is happening to groundwater beneath dairies. A media advisory is being distributed this week. UCCE is inviting the media to a dairy in Hanford on Sept. 13 to get details about the research project.

The rest of this week I will be at the Society for Environmental Journalists conference in Palo Alto. Look for ANR-related developments from the SEJ conference here in the coming days.

Words spoken to the media can have a long life.

I don't want to scare anyone from speaking to the the media, in fact, that's something our office generally encourages. But it is interesting to see how long comments can stay alive when they are published on somebody's Web page.

Back in October 1997, nearly 10 years ago, Andrew Goldsmith of FastCompany.com wrote an article about an expression commonly used in business to suggest one might as well shoot for easier targets before striving for what's out of reach. The idiom: "pick the low hanging fruit."

"When growers send pickers to the field, they don't advise them to pick the low-hanging fruit first," Grant is quoted. "They tell them to pick what's ready to pick. And the first fruit to ripen is what's high up and well exposed to the sun."

Today, the Hartford (Conn.) Courant used Grants' comments in his "Word Watch" column. I guess quote recycling is par for the course in the information age.

Despite the fact that UC Berkeley nutrition specialist Joanne Ikeda retired last year, she continues to serve as a childhood nutrition expert and is frequently contacted for comment by the news media.

Yesterday the San Francisco Chronicle published a fun story by Stacy Finz about changes in laws governing school foods. Finz opened the piece with a personal anecdote about her own childhood snacking habits.

"When I was growing up, my after-school snack almost always started with a triple-decker peanut butter and sugar sandwich on Wonder bread," Finz wrote.

She sought Ikeda's comments on the Institute of Medicine's guidelines for children's foods, which call for a diet containing no more than 35 percent of calories each from fat and sugar and a maximum of 200 mg of sodium daily.

Ikeda said the IOM's standards should be used to help parents and children make good choices. It's more important, however, to follow the federal government's recommended daily values for fat, sodium, calories and the like. Those guidelines can be found at http://mypyramid.gov.

In selecting foods for their children, Ikeda recommends parents check a product's ingredient label first to see if sugar or unhealthful oils are high on the list. If not, then proceed to the nutrition fact box to investigate further, according to the Chron story.

Also during her "retirement," Ikeda is serving as a consultant to Cartoon Network, which is adopting a new health agenda, according to a recent press release. Cartoon Network has newly formalized food- and beverage-related guidelines that will regulate the use of its licensed characters and it will develop new programming that integrates positive messages regarding nutrition and activity, the release says.

Fresno Bee food writer Joan Obra has taken a keen interest in local agriculture. One of her regular contacts is UC Cooperative Extension farm advisor Richard Molinar. As the small farm advisor, he works with many interesting crops -- just the type of thing reporters can't resist.

Today, the Bee's food section features a prominent story and several photos about baby watermelons, a crop Molinar is investigating at the UC Kearney Research and Extension Center. Molinar is holding a melon tasting for the public from 8 a.m. to 12 noon Sept. 6.

Obra's article says that between 2005 and 2006, statewide production of mini watermelons jumped 35 percent to reach 96.5 million pounds. Nationwide, minis made up about 8.5 percent of the U.S. watermelon market last year.

Molinar is growing 23 varieties of small watermelons. He is comparing an array of fruit characteristics, such as weight, skin color, rind thickness, flesh color, texture and sweetness.

Mini watermelons, sometimes called personal watermelons, have their benefits, primarily the fact that they fit in the refrigerator better. But some people feel they are expensive, as Obra's article points out. Production costs are the same for the small fruit as the large so they are often priced similarly.

Recently, a colleague sent photos of another innovative way to make it easier to keep watermelons on refrigerator shelves.

Japanese farmers are growing watermelons inside tempered glass cubes. The result, convenient square melons. However, the price must be over the top. 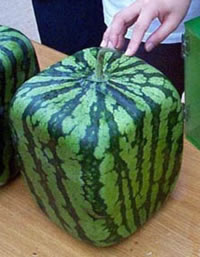