UC President Dynes participated in a tour last Friday at the UC Sierra Foothill Research and Extension Center and a rice field near Marysville. The event was covered in the Sept. 21 Yuba City Appeal-Democrat. Reporter Kyle Buis noted that Dynes likes to see work being done by UC academics first hand.

“If you sit in an office, nobody tells you the whole story,” Buis quoted Dynes. “It’s extremely important to understand the impact of our research.”

"While a simulated redwood deck barely burned, a plastic-lumber composite deck turned into an inferno within 15 minutes," Buis wrote.

"Leaving a section of grass near a creek ungrazed worked like a filter, preventing 99 percent of livestock-leavings bacteria from running into the creek," the article said.

Buis' article said Dynes discussed the importance of the relationship between farmers and UC Davis at the last stop on the tour, where rice was being harvested on Charlie Mathews farm near Marysville. 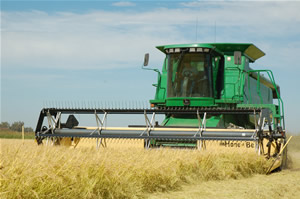 Rice harvester on the Mathew's farm

OC Register turns to UC for information on bugs

According to the Orange County Register, the turning of seasons this week is ending a local "summer of bugs." Today's article says that homeowners, landscape designers, nurserymen are reporting unusually high numbers of flies, mosquitos, thrips and glassy-winged sharpshooters.

“There are flies everywhere,” the paper quotes Cherie Ciotti-Roco, a landscape designer and contractor. “I’ve been out here 20 years, and I’ve never seen flies like this.”

For expert opinion, the Register turned to John Kabashima, the director of UC Cooperative Extension in Orange County.

“When the fall flush hits, all the insects attack,” Kabashima is quoted. “They just go crazy. They’ve been building up since spring, and the population can explode, and each insect can lay potentially hundreds of eggs.”

Kabashima pointed out that eugenia psyllid and citrus leaf miner are expected to become pervasive, according to the paper.

“We just came out with a pest note (for homeowners) on that one,” the article quotes Kabashima.

Unfortunately, the link to the pest note was not included in the article, but I will include it here. 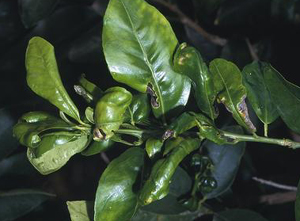 UC Cooperative Extension is helping the public prepare for a law going into effect Jan. 1 with new fire-safe regulations for building new homes, businesses or other buildings. The news media is turning to UC advisors to help spread the information. A workshop held in the Klamath National Forest in Yreka prompted a detailed story in the Mt. Shasta News.

“These new codes will not make your home fire proof,” the newspaper quoted Steve Quarles, UCCE wood durability advisor. “They are designed to improve the chances of your home surviving a wildfire.”

Among other things, the new building codes will require fire resistant roofs, siding and dual-paned windows. During the workshop, Quarles set redwood and a wood and plastic composite decking material on fire to allow the audience to compare their performance. "Within 20 minutes, the redwood decking had put itself out while the plastic in the Trex continued to burn," the article said.

On Nov. 3, another workshop on wildfire will be held at the Lake Tahoe Community College cafeteria, One College Drive, South Lake Tahoe. Presenters from UC Berkeley, U.S. Forest Service, Cal Fire and others will give an overview of forest ecology in the Tahoe Basin, describe the effects of the Angora Fire on the forest, present examples of what the Angora fire area will look like in 10, 20 and 50 years, and discuss the effects and effectiveness of different management strategies for restoring the Angora forests. 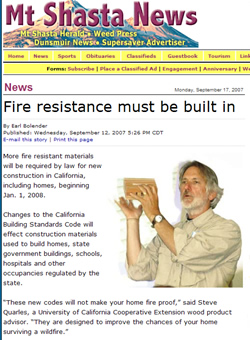 Quarles in the Mt. Shasta News.

The news media made the trek to Hanford yesterday to take the opportunity we offered to meet researcher Thomas Harter, who is initiating an extensive groundwater study at dairies in Kings and Tulare counties. Harter studied the groundwater at dairies in Stanislaus and Merced counties in the late 90s and found groundwater with six-times and more than the limit set for nitrates in drinking water. The South Valley's groundwater is much deeper and the soil contains more clay, which Harter says may reduce groundwater contamination, though he doesn't expect to find groundwater there to be pristine.

The KMPH 10 o'clock news covered the event with a story during the first 15 minutes of the broadcast. The story can be found on its Web site. The Fresno Bee sent reporter Eric Lacayo of the South Valley bureau, who likened the dairies' participation in the study to motorists inviting the Highway Patrol into their vehicles.

"We're kind of putting the speedometer on them and the Highway Patrol is waiting," Lacayo quoted Harter. "We're going to see whether you're speeding or not."

There might have been more coverage of the dairy event had it not conflicted (coincidentally) with another ag groundwater story that played out closer to most TV stations' offices and came complete with demonstrators carrying placards with slogans such as "Where food grows, contaminants flow" and "No More Favors, End Ag Waivers." The Fresno Bee also covered this story. 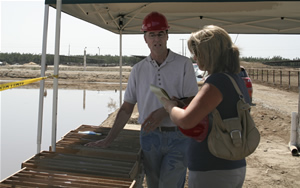 A new home on the horizon for Fresno County UCCE?

The Fresno County Board of Supervisors has taken preliminary steps to buy about 92 acres of farmland off Highway 99 near Selma to build a Center for Agriculture and Food Safety, according to an article published in the Fresno Bee today. The proposed new center would house the county Department of Agriculture, UC Cooperative Extension and other ag-related agencies. Officials also are reviewing other property and exploring the prospect of placing the center on the Fresno State campus.

Also in the plans is a demonstration/research farm geared toward the study of new and specialty crops, water conservation and sanitary handling practices. According to the article, UCCE director Jeanette Sutherlin said the farm would complement existing research operations in Fresno County -- such as UC Kearney Research and Extension Center near Parlier -- and offer farmers a chance to learn about new ag opportunities.

Over the years, several other Valley counties have consolidated UCCE, departments of agriculture and other ag agencies at modern facilities, including Kern, Tulare and Stanislaus counties.

"I think Fresno County ag ought to be on the map with a facility that's worthy of the importance of that industry," Supervisor Judy Case was quoted in the article.