In Fresno County, thousands of children returned to school today, including my own. In their brown bag lunches, they each carried a bottle of water. I'm taking the advice of UC Berkeley nutrition professor Patricia Crawford, who recently published a Q&A about sports drinks (pdf), one of the few caloric beverages that will still be for sale to kids during school hours. Crawford says children should almost always choose water to quench their thirst. HealthNewsDigest.com published a story we put out about the Q&A, but this isn't the only advice about sports drinks you'll find online.

An article this month in SportingNews.com said the Washington Huskies football team are being offered chocolate milk following workouts (along with Gatorade and water.)

According to the article, the decision to offer chocolate milk came after a study last fall from scientists at Indiana University that was published in the International Journal of Sports Nutrition and Exercise Metabolism and was supported in part by the Dairy and Nutrition Council.

"The small study found no significant difference between using a fluid-replacement drink or chocolate milk for athletes following exercise, with dairy folks touting the nutritional benefits of drinking milk -- chocolate or otherwise," the article says.

An op-ed piece by Susan Bowerman, a registered dietitian and assistant director of the UCLA Center for Human Nutrition, published today in the LA Times supports the milk idea saying it is "another tried-and-true recovery drink for many athletes." She continues: "it's protein- and carb-rich, with fluid, potassium and cocoa antioxidants to boot."

Bowerman also cited a small placebo-controlled study published in May in the journal Nutrition that demonstrated that an extract produced from unripe apples helped to counteract fatigue in athletes after a series of bouts on an exercise bike.

"Apples, like all fruits, are a good source of carbohydrates. But the researchers concluded that procyanidin, an antioxidant in apples, was responsible," the article says. 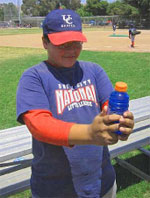 A boy with a sports drink.

Julianna Barbassa of the Associated Press in San Francisco went to UC ANR specialist Howard Rosenberg for comment on a story about an growing need for ag employers to be sure their employees are in the U.S. legally. The story was published yesterday on Ontario's dailybulletin.com and other media outlets.

"Growers are painting a bleak picture of their industry under new federal regulations that pressure employers to fire illegal immigrants," Barbassa wrote in the story.

He told AP that the Bush administration's pronouncement doesn't change the law, it just adds a promise of enforcement that alters the odds of the gamble farmers take whenever they hire a new worker.

It's long been illegal to hire and retain anyone not authorized to work in the United States. Farmers take their chances that documents presented by the 1.6 million farmworkers hired around the country are valid or won't be closely examined, Barbassa paraphrased Rosenberg.

"The risks (of hiring illegal immigrants) have been getting higher, and if the pronouncements that accompanied this rule bear out, then they become higher yet," Rosenberg is quoted in the article.

Master Gardeners are keeping UCCE in the news

A number of Master Gardener programs in California provide content to local newspapers on current, local gardening issues. This time of year, with summer winding down and the fall planting season looming ahead, the Master Garderners' advice is particularly helpful.

"The home-defense zone is within 30 feet of the house. The property-reduced fuel zone lies 30 to 100 feet from the house. Larger zones are needed when your home is on a steep slope or in a windswept exposure," according to the story.

"In California, we use more water on our landscapes than we do for showers, laundry and all other uses combined. A homeowner who wants to use water more responsibly can employ myriad techniques and strategies and still have a pleasant and colorful garden," she wrote, before giving a series of water conservation suggestions.

Writer Julie Eich plugs the Master Gardeners in her story on insects for mymotherlode.com.

"We gardeners are by nature control freaks, determined to impose our will on our gardens," Eich writes. "We're always messing around; rarely content to leave nature alone, we scurry here and there, staking, weeding, spraying, watering, fertilizing."

She tells readers, "If you need help identifying the problem or the treatment, call the Master Gardener office at 209-533-9696 or visit University of California's Pest Notes: http://www.ipm.ucdavis.edumegarden.html."

Joan Swenson writes in a column for the Bakersfield Californian about new Master Gardener classes to be offered in Kern County.

"The instructor is John Karlik, who will cover the science and culture of landscape and garden plants. The classes were formerly offered through Bakersfield College, but now are taught as an educational outreach for the extension service," the story says.