Beekeeping in the 21st Century: Role of Genomics? What's the role of genomics in 21st Century beekeeping? The next UC Davis Department of... 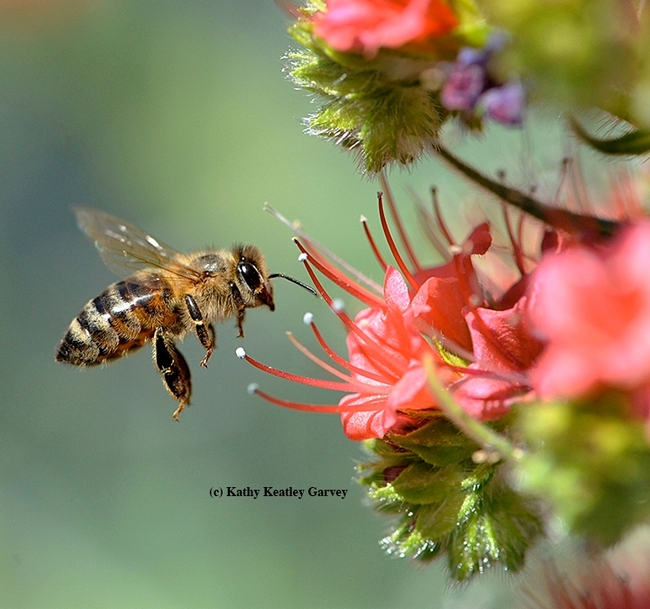 A honey bee heads for a tower of jewels, Echium wildpretii, in a pollinator garden in Vacaville, Calif. (Photo by Kathy Keatley Garvey)

Using no-till and corn-soybean rotation practices in farm fields can significantly reduce field emissions of the greenhouse gas nitrous oxide, according to a Purdue University study.

Tony Vyn, a professor of agronomy, found that no-till reduces nitrous oxide emissions by 57 percent over chisel tilling, which mixes crop residue into surface soil, and 40 percent over moldboard tilling, which completely inverts soil as well as the majority of surface residue. Chisel plowing is the most widely used form of tilling before planting corn in Indiana, he said.

"There was a dramatic reduction simply because of the no-till," said Vyn, whose findings were published in the Soil Science Society of America Journal. "We think the soil disturbance and residue placement impacts of chisel plowing and moldboard plowing modify the soil physical and microbial environments such that more nitrous oxide is created and released."

During early season nitrogen fertilizer applications on corn, no-till may actually reduce nitrous oxide emissions from other forms of nitrogen present in, or resulting from, that fertilizer.

Nitrous oxide is the third-most abundant greenhouse gas in the atmosphere but, according to the U.S. Environmental Protection Agency, has about 310 times more heat-trapping power than carbon dioxide in part because of its 120-year lifespan.

"This suggests there is another benefit to no-till beyond soil conservation and improving water quality," Vyn said. "There is an air quality benefit as well."

Vyn said finding ways to reduce nitrous oxide emissions is important because food production accounts for about 58 percent of all emissions of the gas in the United States. Of that, about 38 percent is coming from the soil.

The study took place on a consistently managed 30-year-old rotation/tillage experiment near Purdue.

The next step in Vyn's research is to develop integrated management practices to reduce nitrous oxide emissions even more. He's also studying additives that slow the conversion of nitrogen-based fertilizers to chemicals that can emit nitrous oxide.

A U.S. Department of Agriculture grant to the Consortium for Agricultural Soil Mitigation of Greenhouse Gases at Kansas State University funded the research. The Indiana Corn Marketing Council and Dow AgroSciences are funding his present on-farm studies of integrated management practices to reduce nitrous oxide emissions.