Eating Insects at the Bohart Museum of Entomology 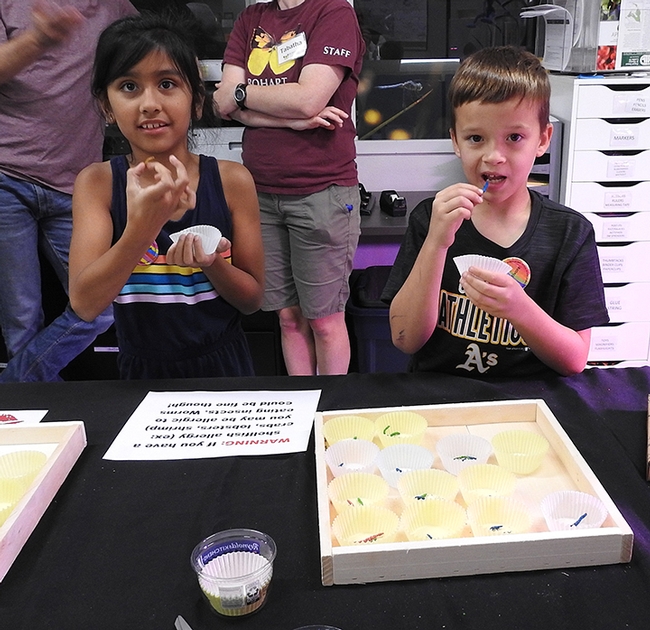 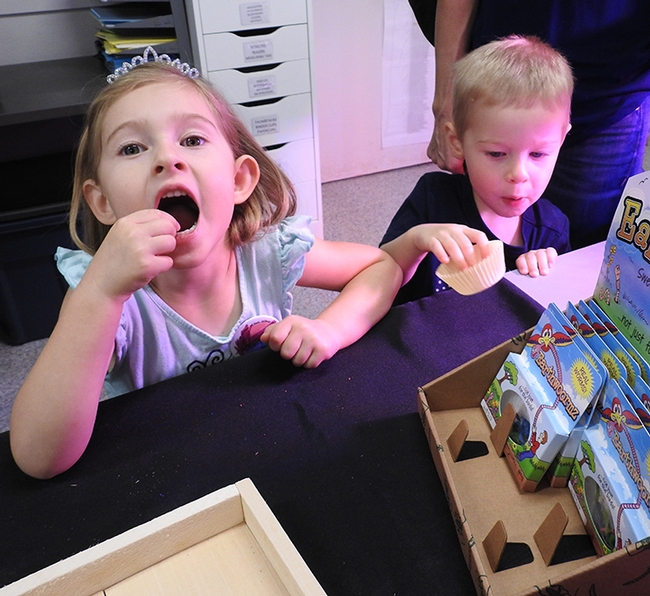 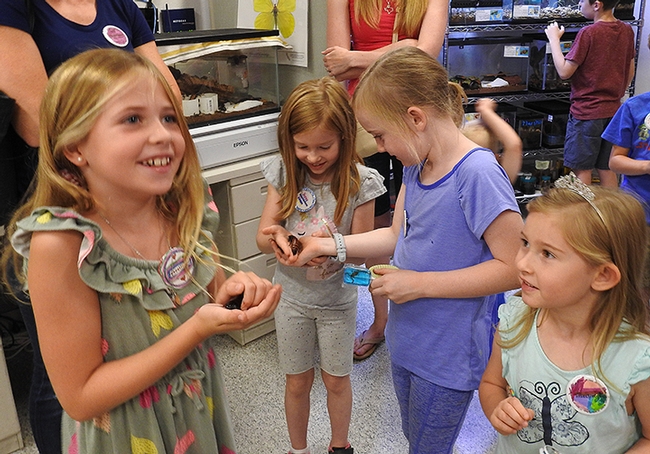 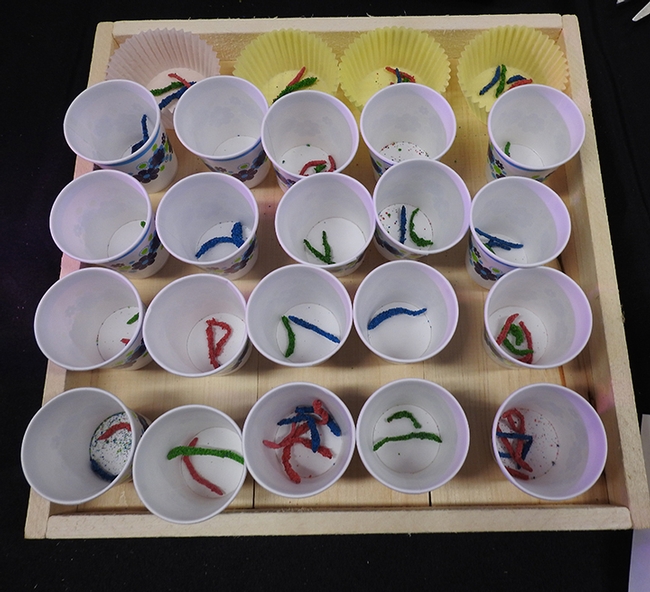 A close-up of the earthworms. (Photo by Kathy Keatley Garvey)

A close-up of the earthworms. (Photo by Kathy Keatley Garvey) 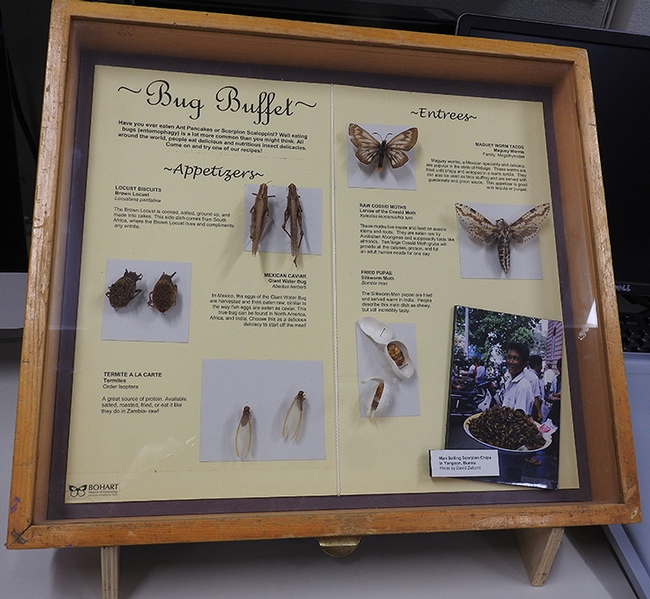 There are 4,000 species of earthworms grouped into five families and distributed all over the world. Some grow uo to 3 feet long, while others are only a few tenths of inches. We call them nightcrawlers, field worms, manure worms, red worms and some people call them little diggers.

In California, we have some native species of earthworms, but in many cases non-native introduced species have come to dominate. The predominant native species belong to the Argilophilus and Diplocardia while many of the non-native are of European in origin in the Lumbricidae family. Many of these non-natives were probably introduced by settlers bringing plants from home, which had soil containing the worms. A survey of California earthworms by the US Forest Service can be found at:

This is a wonderful description of earthworm biology and their occurrence in the landscape.

When digging in citrus orchards, it is common to find earthworms in the wetted mulch under tree canopies. Many of our citrus orchards were initially established by “balled and burlap” nursery trees that brought worms along with the soil. In the case of many avocado orchards, on the other hand, it can be rare to find earthworms in orchards. Most avocado orchards have been established since the 1970s when potting mixes and plastic liners were the standard practice and worms were not part of the planting media. Even though there is a thick leaf mulch in avocado orchards, the worms have not been introduced, and it is rare to find them.

Numerous investigators have pointed out the beneficial effects of earthworms on soil properties. One of the first of these observers was Charles Darwin who published Earthworms and Vegetable Mould in 1881. He remarked on the great quantity of soil the worms can move in a year. He estimated that the earthworms in some of his pastures could form a new layer of soil 7 inches thick in thirty years, or that they brought up about 20 tons of soil per acre, enough to form a layer 0.2-inch-deep each year.

Earthworms, where they flourish, are important agents in mixing the dead surface litter with the main body of the soil. They drag the leaves and other litter down into their burrows where soil microorganisms also begin digesting the material. Some earthworms can burrow as deeply as 5 to 6 feet, but most concentrate in the top 6 to 8 inches of soil.

The worm subsists on organic matter such as leaves and dead roots near the soil surface. The earthworm ingests soil particles along with the organic matter and grinds up the organic matter in a gizzard just as a chicken does. This is excreted in what we call worm casts. The castings differ chemically from the rest of the soil, as they are richer in nitrogen, potassium and other mineral constituents.

Castings are a natural by-product of worms. When added to normal soils in gardens or lawns, they provide the same kinds of benefits as other bulky organic fertilizers. Castings today are not commonly used as fertilizer by commercial plant growers because of their cost relative to other fertilizers. However, castings are used by some organic growers and are sold commercially as a soil amendment or planting medium for ornamental plants grown in pots.

-Organic residues are more rapidly degraded with the release of elements such as nitrogen, sulfur and other nutrients.

-Some of the inorganic soil minerals tend to be solubilized by the digestive process.

-The earthworm carries surface nutrients from the soil surface and imports them into the root zone of the plant.

Although earthworms are considered beneficial to soil productivity, few valid studies have been made to determine whether their presence will significantly improve plant growth. This may seem odd since many of us have learned from childhood that worms are good. It is something like the chicken and the egg analogy. The conditions that are conducive to earthworms are also ideal for plants. Both plants and worms need temperatures between 60 and 100 degrees F for good growth; both need water, but not too much or little; they both require oxygen for respiration; and they do not like soils that are too acid or basic or too salty. By correcting soil conditions that are unfavorable for one will also improve the outlook for the other. The earthworm is a natural component of the soil population. If the soil is properly managed this natural population will thrive. In this sense, the presence or absence or earthworms can be an indicator of the "fertility" of one's soil. 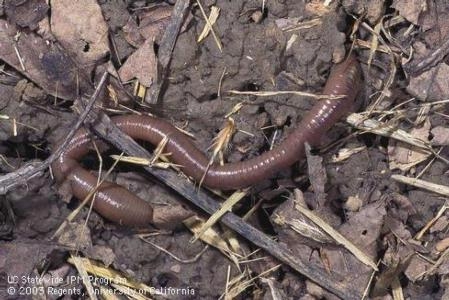 With the Rain Come Land Planaria

When it starts to rain, things start happening. Growers come in with some interesting specimens. Wet, high leaf mulch environments create a special world that brings out some interesting creatures like slime molds and land planaria.

Land planaria are large, ‘slimy,' flatworms that reach ¾-12 ½ inches in length and 1/8 inch wide. Unlike their parasite relatives the tapeworms, these flatworms are free living predators of earthworms, slugs, snails and soil arthropods. Originally brought to the United States in the soil of potted plants transported from Indo-China, land planaria were first found in American greenhouses in 1901. As residents of potted plants, they were transported into new areas, established themselves in green houses, and eventually moved out to adjacent areas. Today land planaria are found in the natural environment of several states including: Alabama, California, Florida, Georgia, Illinois, Kentucky, Louisiana, Massachusetts, Mississippi, New Jersey, New York, North Carolina, Ohio, Oklahoma, South Carolina, Tennessee, and Texas.

Land planaria are brown-gray to yellowish in color with a series of long, dark stripes starting at the head.  As a planarian ages the stripes become one long line, reaching the tip of the body. They have a triangular-shaped head and a long flattened body.  Some  have  eyespots.  The ‘slimy' appearance of planarians is due to a continual secretion of a mucus-type material. The mucus helps the planarian maintain body moisture, move, and is a defense mechanism due to its horrible taste. Land planaria are able to survive freezing weather conditions by resting in protected areas where boards or fallen trees cover rooted plants.  During warmer seasons they are found under logs, rocks, woodpiles, plant debris and occasionally caves, but are rarely found in rural areas. They go where the nursery plants went.  Oddly, they are rarely found in mulch-rich avocado orchards because most avocado orchards have few earthworms.  Go look.  Most avocados came from nurseries where potting mixes were fumigated or pasteurized before being sent out to the field and earthworms didn't go with the trees.

Throughout the fall and winter, planarians move outside their protective areas at night to hunt for earthworms that come to the soil surface after rainstorms subside. They prefer dark areas, cool temperatures and require high humidity. A humid environment is essential because death occurs quickly if a planarian losses 45% of its body moisture.

The inside of a land planaria is quite simple. They do not have a skeleton, circulatory, respiratory or digestive system.  The nervous system consists of a mass of nerve tissue in the head attached to longer nerves in the body, arranged in a ladder shape.

Locomotion is made possible by the “creeping sole”; a strip of hairs going down the middle of the underside of the body and mucus secretion glands. The secretion glands deposit a layer of mucus that the hairs push against to move the planarians body across a surface.

Land planaria can reproduce in two ways. When land planarians reproduce by mating, they place eggs in cocoons that are red in color. After 24 hours, the cocoon turns black and the eggs continue to develop. Young planarians hatch and leave the cocoons within 21 days. If a land planaria reproduces without mating, the parent moves across the ground and attaches the tip of its tail to a rock or piece of wood. Once the tail is attached, the flatworm moves forward and the tip of the tail remains on the substrate. The tip of the tail left by the parent develops a head within 10 days and a young planarian is formed. A parent deposits the tip of its tail once or twice a month.

Land planaria primarily consume earthworms and other small soil organisms. They have one opening on the underside of their body that serves for both intake and elimination. The mouth extends and penetrates the body of a prey item when the planarian is attacking. Digestive mucus and the circular muscles within the mouth contract causing a sucking motion that allows the planarian to feed.   The victim is slowly reduced into small particles that are consumed. Land planarians can survive for several weeks without food. If little prey is available, they will become cannibalistic or use their own reproductive tissue as a food source.

The only economic problem associated with land planarians is their ability to destroy entire earthworm populations in a greenhouse. Land planarians can disturb property owners who find them and their trails of mucus disgusting or annoying. The number of land planarians in an area usually is small and control is not recommended.  In fact, it takes just the right sort of environment to consistently see them, like an irrigated garden with lots of hiding places or an orchard near a garden. If the return of earthworms to farm fields is an indication of success, then Sano Farms is on the right track.

In addition to boosting yield, the system they developed for the 4,000-acre farm is cheaper, increases soil organic matter and improves the tilth of their silty clay soil.

The farmers took several trips to the Midwest and consulted with UC Davis Cooperative Extension specialist Jeff Mitchell to learn the improved management techniques they applied on the farm.

After switching from furrow irrigation to drip, Sano and Sanchez began experimenting with cover crops.

"It wasn’t always an easy transition into cover crops," Mitchell said. "It did take some time to learn the best way to manage them."

As the benefits of years of cover cropping accumulated, they saw that they didn’t need to till the entire field to get good soil-seed contact; they only needed to till a strip of soil a few inches wide.

Recently, they shared their innovative farming system with other growers at an open house event sponsored by California's Conservation Tillage and Cropping Systems Workgroup.