California agriculture experienced a nearly three percent increase in the sales value of its products in 2012. The state's 80,500 farms and ranches received a record $44.7 billion for their output last year, up from $43.3 billion in 2011 and $37.9 billion during 2010. California remained the number one state in cash farm receipts with 11.3 percent of the US total. The state accounted for 15 percent of national receipts for crops and 7.1 percent of the US revenue for livestock and livestock products. Exports totaled $18.18 billion in value which represents an eight percent increase over the previous year.

California's top-ten valued commodities for 2012 are:

Please see complete statistics for 2012, reproduced as PDF files below, or use the link in the right column to access this report and others on the NASS website. 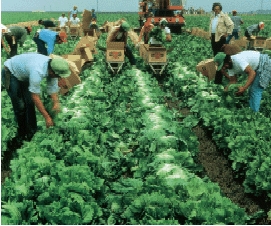