Lynn Kimsey, director of the Bohart Museum of Entomology, with an Asian giant hornet specimen from the Bohart.
Want to learn about "murder hornets?"

They probably think this qualifies as murder in the first degree!

"Asian giant hornet attacks and destroys honey bee hives. A few hornets can destroy a hive in a matter of hours. The hornets enter a 'slaughter phase' where they kill bees by decapitating them. They then defend the hive as their own, taking the brood to feed their own young. They also attack other insects but are not known to destroy entire populations of those insects."

"While they do not generally attack people or pets, they can attack when threatened. Their stinger is longer than that of a honey bee and their venom is more toxic. They can also sting repeatedly."

"If it becomes established, this hornet will have negative impacts on the environment, economy, and public health of Washington State."

Globally recognized hymenopterist Lynn Kimsey, director of the Bohart Museum of Entomology and UC Davis professor of entomology, will deliver an hourlong presentation from 1 to 2 p.m. on Thursday, Feb. 18 as part of the UC Davis Biodiversity Museum Month program. She also will field questions. To access the program, link to   https://ucdavis.zoom.us/j/95724669897.

Kimsey, a two-term past president of the International Society of Hymenopterists, shed some light on the giant insect in an interview with urban entomologist Michael Bentley on his BugBytes podcast. Click here to listen.

Kimsey and two other wasp experts published “The Diversity of Hornets in the Genus Vespa (Hymenoptera: Vespidae; Vespinae); Their Importance and Interceptions in the United States,” in the journal Insect Systematics and Diversity last summer. Lead author Allan Smith-Pardo, U.S. Department of Agriculture Animal and Plant Health Inspection Service (APHIS), and co-authors James Carpenter of the American Museum of Natural History's Division of Invertebrate Zoology, and Kimsey covered 22 species of hornets, including V. mandarinia.

Vespa species are “primarily predators of other insects, and some species are known to attack and feed on honey bees (Apis mellifera), which makes them a serious threat to apiculture,” the authors wrote in their abstract.

Be sure to watch the UC Davis program Thursday.

Said Kimsey: "l will focus on the biology of common pest paper wasps, like western yellowjacket, European paper wasp and the bald-faced hornet and of course, true hornets and whether they're a threat to California." 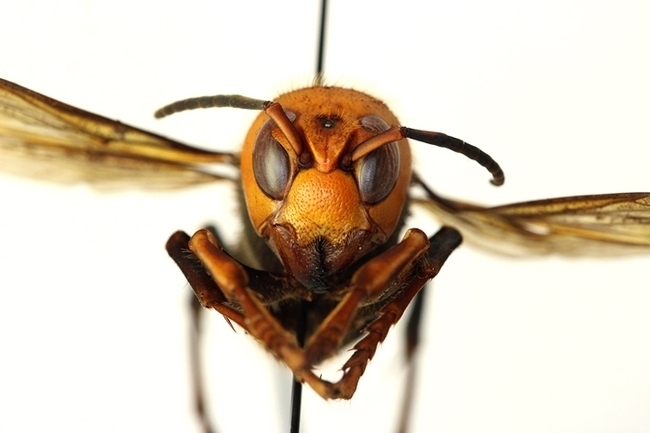 The Asian giant hornet, which the news media named "murder hornet." (Photo courtesy of the Washington State Department of Agriculture)