Glyphosate is one of the most commonly used herbicides in orchard crops in California both in terms of treated acres and amount of active ingredient applied. Weed managers are generally familiar with the attributes of glyphosate as a postemergence herbicide. Duke and Powles (2008) published an article in Pest Management Science entitled “Glyphosate: a once-in-a-century-herbicide”. Suffice to say, it's a pretty useful herbicide, if that's your thing. It has also been the subject of several controversies in the past couple of decades.

One of those controversies was a source of frequent extension questions from California farmers and Pest Control Advisors about 10 years ago. In the late 2000's there were several researcher articles from work done in glyphosate-tolerant soybeans that suggested there might be some nontarget impacts of glyphosate on crop nutrient status, plant disease interaction, and microbial community effects. In California tree crops concern generally focused around whether glyphosate in the soil could chelate micronutrients and lead to nutrient deficiencies and/or if repeated use could cause enough glyphosate to accumulate in soil and have direct impacts on the trees.

In a 2012 review article on the impacts of glyphosate in the soil environment, Duke et al. suggested that “significant effects of glyphosate on soil mineral content is unlikely” and there is no clear negative trend in orchard productivity data in California even after decades of glyphosate use. However, because this was a concern for the California orchard crop industries, we conducted a long-term research project from 2013 to 2020 to help address the issue in representative orchard crops.

If you're REALLY interested, the full report was published in summer 2020 as an open-access article in the journal Weed Technology which can be accessed HERE.

If you're only a LITTLE interested, here is the essence of the project conduct at the UC Davis Plant Sciences Field Facility in Davis, CA:

Scientists will always remind you that you “can't prove a negative”, and that remains true. However, we think these data suggest that it is probably not easy or common for almond, cherry, or prunes to be negatively impacted by glyphosate residues in the soil either due to direct herbicide effects or to micronutrient deficiencies.

This work was initially supported by the Almond Board of California, the California Dried Plum Board and with nursery stock provided by Sierra Gold Nurseries. Over time, the experiments were maintained with general program support from the crop protection industry, orchard commodity groups, and agricultural input suppliers. We gratefully thank our colleagues who contributed to this long-term project along the way.

This blog originally appeard in the UC Weed Science Blog 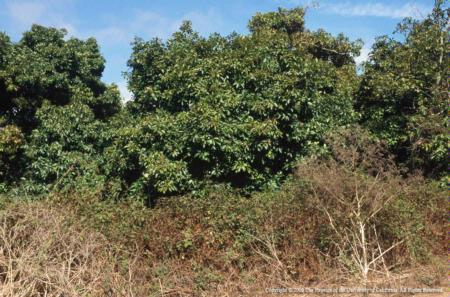