Pruning trees is dangerous. You think you know which way that branch is going to drop, and instead it falls right on your head. Good thing you are wearing a helmet, but a big limb is not going to be stopped by a helmet. A recent report out of Penn State developed some statistics on tree “felling' – pruning – which should be noted by anyone cutting trees. https://onlinelibrary.wiley.com/doi/10.1002/ajim.23286 .  Where it reads “logging and landscaping”, read avocado pruning.  These statistics are just for deaths from trees, not injuries.  I couldn't find on-farm statistics of pruning injuries, but, know that farming is one of those high risk activities like other tree-related interactions.

Tree felling — whether by professional loggers in a forest setting or by landscapers in urban and rural landscapes — is the most dangerous job in what are two of the most dangerous industries, according to Penn State researchers who conducted a new study of associated deaths.

The Occupational Safety and Health Administration calls logging “the most dangerous occupation in the United States.” The fatal injury rate for loggers is more than 30 times the rate for all U.S. workers. Tree-care workers also encounter hazards at rates much higher than the average employee.

“This was the first research to look at commercial logging and landscaping services together,” said Judd Michael, Nationwide Insurance Professor of Agricultural Safety and Health and professor of agricultural and biological engineering, College of Agricultural Sciences. “It was a unique and more accurate way to assess fatalities. The commonality, of course, is that workers in both fields fell trees. They do it using very different methods, but either way, it is extremely hazardous work.”

Logging in Appalachia and other regions with forests growing on rough, mountainous terrain continues largely unmechanized, with workers felling trees with chainsaws, standing at their bases; landscapers, on the other hand — because they must control the fall of limbs and trunks — must climb trees with chainsaws and cut sections down.

To reach their conclusions, the researchers analyzed an Occupational Safety and Health Administration database to identify occupational tree-felling fatalities in the United States during a 10-year period — from 2010 through the first half of 2020. They compared data for the two industry segments of logging and landscaping services.

In findings recently published in the American Journal of Industrial Medicine, the researchers reported that there were 314 fatalities over the period. The victims were overwhelmingly male, with the median age being 43. “Struck-by” was the No. 1 event type causing fatalities, with the head being the most frequent body part involved in fatalities.

Falls from elevation was the only event type significantly different between the logging and landscaping industries, Michael noted, adding “but you would expect that, given the nature of the work.” Poor decision-making was listed as a key component of fatal incidents, and in some cases bystanders were fatally injured due to the actions of others.

The number of tree-felling fatalities varied greatly from year to year during the study, and there were no clear trends in fatality rates, Michael pointed out. The reasons for the cyclical rise and fall of tree-felling fatalities are unknown but he suspects they may be driven by weather events. One possible causal factor was whether hurricanes made landfall in the coastal states.

Storm damage may lead to increased fatalities, he explained. Years such as 2012, 2017 and 2018 with abnormally high damage costs from Atlantic storms also saw relatively high numbers of landscaping fatalities that could be associated with storm?damaged urban trees, while 2014 and 2015 had very quiet hurricane seasons and relatively few fatalities.

“Look at what happened with Hurricane Ida recently, with all the power lines that were down because of downed trees in Louisiana,” he said. “We don't know yet if that will lead to landscape tree-feller deaths, but we suspect large storms lead to more fatalities. Utilities can't restore power without clearing downed trees, so the importance of keeping tree operations safe can't be overstated.”

Getting a better handle on fatality numbers is just an early step in trying to make the job of tree fellers safer, Michael explained. And it is not as simple as just advising that protective equipment should be worn.

“Personal protective equipment is mandated, but that means a hard hat or some chaps on a worker's legs to stop a saw from cutting through,” he said. “But if you have a 1,000-pound limb falling from 10 feet or 50 feet, no equipment is going to protect them. And that's one of our key takeaways — you can have all the protection you want, but it won't help you if you get hit by a tree trunk or large limb. That's why we need to have better decision-making to keep people out of danger.”

There is a need to focus on hazards associated with tree-felling activities so that proactive prevention strategies can be developed, Michael suggested.

“Employers in the landscaping industry should put extra emphasis on fall protection and prevention for those working in elevated positions,” he said. “Greater attention to falling object avoidance for persons working around a tree being felled could also prevent fatalities. Logging companies should strive to adopt mechanized methods for tree felling.”

But fatalities from tree felling are just a fraction of the number of severe injuries incurred while working around trees, Michael added. By focusing on the cause of fatalities, Penn State researchers hope that strategies can be developed to also reduce the number of injuries in these important industries.

And KEEP those TOOLS SHARP: https://ucanr.edu/blogs/blogcore/postdetail.cfm?postnum=28916

This map shows the locations of tree-felling fatalities, 2010–2020. 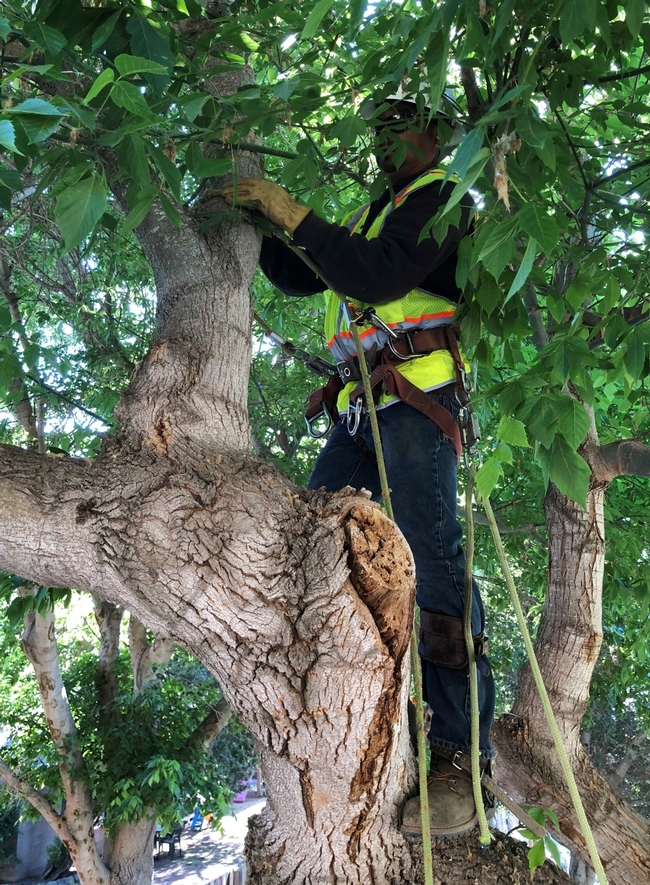