The potato bug, also known as a Jerusalem cricket, seems to be everywhere in the Bay Area after the heavy rains. It gained the nickname of "potato bug" because it feeds occasionally on potato tubers.

It's a fascinating, slow-moving, ground-dwelling, wingless insect that belongs to the family Stenopelmatidae.  It's as huge as it is harmless; it can reach 2.5 inches in length.

And if you ask Lynn Kimsey, director of the Bohart Museum of Entomology at UC Davis and a distinguished professor of entomology about them, you'll get both information and humor.

Reporter Victoria Sepulveda interviewed her for a story, "Here's Why You May Have Seen Enormous Bugs in the Bay Area Recently," published Nov. 10 in the San Francisco Chronicle.

The impetus? Sepulveda and her neighbors in Vallejo recently encountered some of these huge bugs--one atop a bed--and wanted to know more about these ferocious-looking critters with massive jaws.

"To ease my fears, and to figure out where all these bugs were coming from, I reached out to Lynn Kimsey, director of UC Davis' Bohart Museum of Entomology and a professor of entomology at the university," Sepulveda wrote.

Kimsey deadpanned: “At least they're not calling them murder hornets."

Kimsey is an expert on wasps, including the Asian giant hornets. Vespa mandarinia. Ever since the invasive species appeared near the U.S. Canadian border in 2019, she's been fielding scores of questions on the so-called "murder wasps."

But back to the potato bugs.

Kimsey assured her that the Jerusalem crickets, indigenous to the western United States, are "pretty harmless."  They can bite, if handled. The insect is an important food source for owls, coyotes and foxes and other critters in the winter when food is scarce, she said.

Wrote Sepulveda: "Although there are plenty of myths about the Jerusalem cricket being a garden pest, Kimsey said it wouldn't know how to eat '99% of garden plants' because those plants aren't native to California. While Jerusalem crickets may occasionally feed on seedlings, they are mostly scavengers, feeding on roots, tubers and occasionally even animal matter, according to a Bohart Museum fact sheet on the critters."

Why the sudden proliferation? Well, Kimsey told her, the males are out right now "looking for love." Thus, they're more visible now. Plus, those recent rain storms drove them from the soaked soil.

“So the boys are out looking for love, and I think the really heavy rains made the soil too wet for them, so they're up when they wouldn't be,” Kimsey told her.

But how did one manage to climb into someone's bed? Kimsey quipped: "They move slower than a VW for crying out loud."

But how did it get there? Probably a male looking for love and pulled itself up on the bedspread, the UC Davis entomologist theorized.

"It was clearly a boy," Kimsey quipped, "and it was hormone-poisoned."

Now about those murder hornets.... 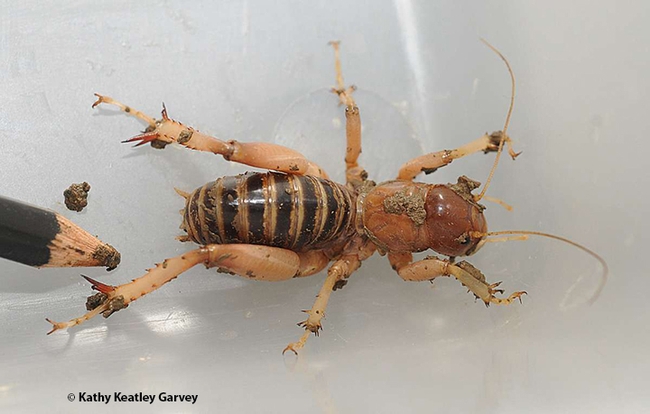