Although you never know about the w3ather, we do know that if heavy rain occurs after color break in mandarins there can be significant rind breakdown. This problem can destroy much of the crop and the problem is largely preventable.

Pre-harvest rind decay of mandarins in California generally occurs shortly after rain falls and is most severe on Satsuma mandarins. Although some researchers have associated the problem with fungi such as Alernaria species, isolations from affected fret have been inconsistent. Inoculations with isolated fungi only sometimes reproduce disease symptoms and only on water-soaked fruit. Furthermore, in preliminary field trials there were conducted in Butte Co in the fall of 2002 and 2003, fungicide treatments that included Topsin-M, Pristine and Abound only reduced the incidence of disease from 99% in the control to approximately 90% .   These data suggested that mandarin rind breakdown is a physiological, abiotic disorder of fruit rather than a pathological problem and the fungi isolated are rather secondary causes of rind decay than primary pathogens.

Rind breakdown of citrus was previously reported by Fawcett and others in the 1930s. Wet weather combined with a sudden decrease in temperature was shown to result in generation of rind oil and collapse of cells just under the cuticle. In laboratory and field trials in 2003, fruit treatments with water repellants reduced the incidence of rind breakdown to very low levels. Field trials were again conducted in the fall of 2004. Fungicide treatments were ineffective in these trials. In all trials, application so Vapor-Gard or Omni oil significantly reduced the disorder. In all programs with Vapor-

Vapor-Gard and Omni oil, a first application was made at the end of October and there was no significant difference in efficacy when additions applications were done. When tree were protected from rainfall using a tent, the disorder could not be detected, indicating the rind breakdown is correlated to rainfall.

In summary, results from the trials support previous findings by Fawcett that mandarin rind disorder is an abiotic, weather-related problem of mature fruit that has undergone a green to orange color change. Using a water repellant helps protect the fruit.

Etiology and Management of a Mandarin Rind Disorder in California 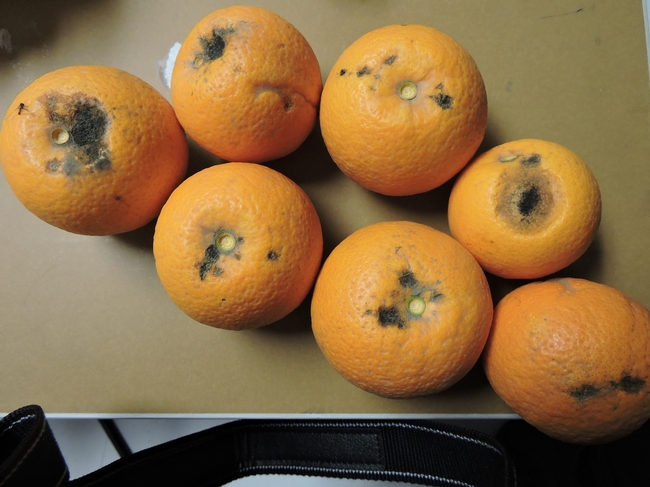