The invasive beetle, goldspotted oak borer (GSOB), has been found in the mountain community of Sugarloaf near Big Bear in San Bernardino County, reported the Chino Champion. The detection causes concern for other nearby communities where oak trees are prized. GSOB adults are black with yellow spots, and about 1 centimeter long.
All stages of the insect - larval, pupal and adult - were found underneath bark in dying black oak trees on private property. GSOB is a native of Guatemala, southern Mexico and southeastern Arizona. It was first collected in San Diego County in 2004. To limit the pest's spread, officials ask Californians not to transport firewood from one location to another.

"It realistically should be treated like a quarantine situation," said Doug Yanega of the UC Riverside Department of Entomology. "All it takes is a few people who don't know any better or think the rules don't apply to them to infest new areas."

The Chino Hills area has nearly 4,000 oak trees in parks, landscaping and parkways, not including trees on private property and city open space.

"The goldspotted oak borer posts an unprecedented threat to native oaks in Southern California," said UC Cooperative Extension specialist Mark Hoddle, director of the the Center for Invasive Species Research at UC Riverside. "Hiking trails and campsites have been closed because of the risk of branches dropping from dead trees." They are asking for avocado grower's participation in areas that are susceptible to the GSOB and/or the Polyphagous Shot Hole Borer (PSHB). GSOB susceptible areas include oak woodlands and forests while PSHB environments include avocado groves. Some of these susceptible locations are primarily focused in the Fallbrook, Escondido, Valley Center, and Alpine areas. Eventually signs will be developed that will feature both the GSOB and the PSHB and discourage movement of oak and avocado wood.

The signs can go in a variety of frame designs. Most signs are 4' x 8'and are normally inserted into a redwood frame, but can be as simple as posts and a piece of exterior plywood onto which the thin aluminum sheet sign can be attached. The signs should be placed visibly along major roadways or busy streets.

If you would like to participate by permitting signs to be placed on your property along major streets, please contact: When GSOB emerges from underneath bark, they leave "D"-shaped exit holes.
Two more trees in Idyllwild are infested with goldspotted oak borer, reported the Riverside Press-Enterprise yesterday. The announcement came at a community meeting over the weekend, in which Tom Scott, UC Cooperative Extension specialist in the Department of Natural Resources at UC Riverside, and Kevin Turner, UC Cooperative Extension goldspotted oak borer program coordinator, joined fire and forestry officials to brief local residents about the new pest threat in the area.

Residents learned how to examine oak firewood this winter and how watch their black oaks and coast live oaks this spring for signs that they may harbor the insect. Firewood or trees suspected of being infested should be reported to (951) 659-3850, the story said. More information is available at the UC Cooperative Extension GSOB website.

Cal Fire, UC Cooperative Extension and other officials will be meeting with residents of Idyllwild tomorrow to enlist their help in stopping the goldspotted oak borers' tree destruction in the picturesque mountain community, reported the Riverside Press-Enterprise.

GSOB appears to have spread to Idyllwild by hitchhiking on firewood from San Diego, where it has killed some 80,000 oak trees. It has been found in only one tree in Idyllwild so far.

Tom Scott, UC Cooperative Extension specialist in the Department of Environmental Sciences at UC Riverside, and Kevin Turner, UCCE goldspotted oak borer program coordinator, will be among the speakers.

"What we're hoping to do is go to Arizona and find those insects that are specialized to only feed on goldspotted oak borer and they're efficient at controlling the population," Lopez said. 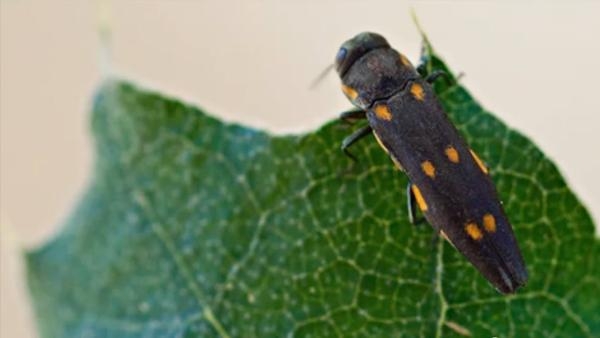